Shipping:  All orders are shipped to you for a flat fee of $5.95, no matter how many items you purchase. So go ahead. Spoil yourself!

The Cats of Celt Wares

You’ve often asked about the three wee ‘amateur greeters’ we have on staff; so here is a little bit of their back stories, for your reading pleasure.

Willow sleeps, in the old store, while we pack for a Festival
You'll work when I say you can work
Willow in the store asleep behind the CDs
Our first kitty. One day, on a trip to buy eggs at an Amish farm on May Post Office Road, this adorable ball of fluff waddled straight out to my husband, rubbed his legs, and the two instantly became bonded. “You can have ‘em if you like” said the farmer, and no further encouragement was needed.

He had a limp, and a gummy left eye, and ate little the first week, retching up lumps, half his size. We slowly nursed him back to health, until he was strong, bouncy, and his true nature was revealed. He wasn’t just a cuddle monster, he was a wee bit of a real monster. Of course, life on the road was a strange way for a kitty to grow up. Each week had a different view out of the window for him. At night, if the place was right, he would venture out at night, and be waiting under the door step, the next day. But he also very happy the day we opened the first store in Strasburg. He spent the day walking round exploring, constantly purring. After a week or so, he was allowed to venture out back. He claimed the sheds, and did not want to come in for the rest of the summer.

Living closely with us in his younger years probably skewed his palate a little. He loves his veggies, including cucumbers, bell peppers and olives; he likes cheese; and he loves his leftover Flahavans Oatmeal in the mornings.

You may have noticed he’s down to one eye. He always had a habit of sticking his head down places it did not belong. Then, a few weeks before Christmas he appeared sheepishly out from the bush, with his eye, an inch away from where it should be. We were both raised on farms, and spending large amounts on pets was not how things were done. But you should have seen him. Not a braver kitty there has ever been. There was no complaining from him, in his suffering.

Anywho. To make a short story, long, all the Christmas money and a wee bit more, went on him that year, getting him fixed up. He’s heading into his ninth year now. He is slowly becoming mellower. More tolerant of the other cats. And when the cold weather settles in, he still becomes my husbands lap buddy each night.

Petability: Those he likes, he is very affectionate to. But he has his moods, so you have been duly warned!

Red's First Visit
How do I drive this thing?
Red thinking of pouncing on Willow
One day, a little more than a year ago, the scrawniest, most timid waif, chanced upon our doorstep. As is my husband’s custom, a small meal was provided to help him on his way.

He never left. He did grow bigger and bigger though. Not over-weight, just muscular. He does love his food. But his most defining characteristic, is that he must be the nicest cat, I have ever known in my entire live. He always greets us with a cheerly ‘Hello’. He is always ready for a chat. Loves to be petted. And though he loves food, he will always stop eating for the chance of affection.

He is a ‘company’ cat. He always hangs out when I garden, or he’ll be with one of the other cats, whenever he can.

Petability: He can be a little shy, but his affection is worth your patience.

Hi I'm Fluffy - Please feed me
Fluffy in the Yard
Fluffy takes to Red almost straight away
Again, another waif, who dropped in one evening scrawny and starving, a few years back, and settled in. We never thought she’d be staying, so she was just given the nickname ‘Fluffy’, and the name just stuck. She is the prettiest looking of the cats, with her wee white booties, and cute little face. But alas she was the most feral of our visitors, and has never become tame. We have made some progress. If I am coming out of the house, around a designated feeding time, she will sometimes let me stroke her, 2 or three times, especially if Red is there too. But if I approach from any other direction – forget it!

She now lives predominately under our BBQ, to provide herself with ready access to the food bowls by the door. She may be wild, but she’s smart!

Petability: She will run from you the moment you look at her. Don’t take it personally.

And remember, a portion of all sales goes directly into their tummies, so know that your business is purringly appreciated. 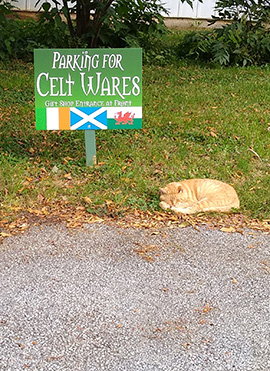 There is parking at the back of the store for 3 vehicles.

For very large vehicles, visitors with RVs and those towing, we recommend parking at Millers Smorgasbord - a few doors to the west - and walking up.

You might even want to try dinner there on your way back. It's pretty good!

"My experience was just wonderful and I will definitely be returning again."